Ever wonder why some succeed where others fail? Every young punk fan probably dreamt of anarchy and not playing by the rules. When one or two people do this, it’s largely just a nuisance to others, but if you take this to its extension, you end up with totally lawless societies consisting of survival of the fittest and eventually a violent dictatorship. Back to square one for the ideological anarchists.

We’re now seeing that the countries and businesses that are being successful have one thing in common: they have a well thought out LONG TERM plan. China for instance is buying up Australian farm land and mining leases not so much for the current value, but based on that they know they will need food security and minerals in decades to come. In the mean time, they can collect the profits from these companies whilst Australians are left to work for wages only (we’ve lost the future profits).

We still live in the best country in the world. However, we are not capitalising on our natural advantages. This was highlighted to me by a recent visit to Singapore. At 719km2, the entire country of nearly six million people is less than two thirds the area of Brisbane (which has just over 2 million people). It has no real natural advantages whatsoever, but has formed itself into a global financial and shipping centre. Shipping channels around Singapore have four lanes in each direction, and it is the largest port in the world. This is despite Singapore having very little import or export requirements to underpin becoming such a powerhouse, and wages that are much higher than neighbouring countries that geographically could have achieved the same status. 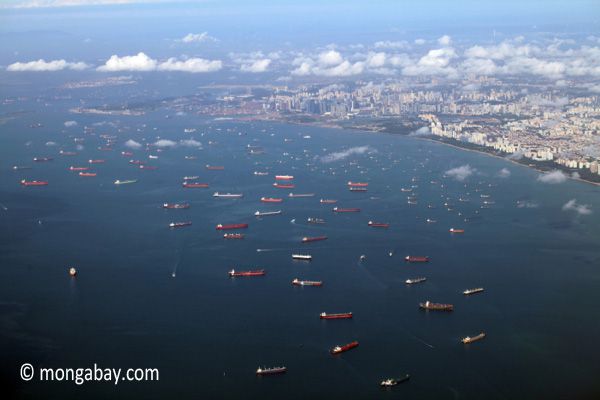 So, how have they achieved this? They are working to a 50 year plan. Currently, this involves relocating their main industry (the ports) from the more densely populated CBD/Tourism area to an area they are building out into the sea. Such an investment is likely to see them retain their competitiveness through even higher productivity.

Whilst I’m no advocate for unnecessary regulation and Government intervention, there are some notable outcomes from the over-regulation Singapore sometimes engages. Its rules are successful more because it is outcomes focussed and enforced, compared to other systems with rules for the sake of rules. Despite the most expensive car registration in the world (re-registering a small 10 year old car costs approximately $35,000), taxi’s still cost about a third of what they do in Australia for an equivalent trip. Cheeky marketing merchandise promotes Singapore as “A Fine Place”, a slogan linking in to well known rules such as fines for littering (and they are enforced, no litter anywhere – $300 for a first time offender for a candy wrapper or cigarette, to court appearances for a can, get caught three times and you’re cleaning the streets weekly wearing a bib “I am a litterer”), vandalism (fines is the lenient sentence, most get the cane or jail time). Not flushing the toilet carries a fine to, and elevators are fitted with urine smell detectors that automatically lock the doors until the police arrive for an arrest. The outcome? Very little anti-social behaviour.

Singapore is also possibly the only country in the world not entrapped in the welfare Ponzi scheme. Welfare is only available for those who truly need it, after accessing all personal funds, family funds, and ability to work tests instead of the “benefits for all” approach of most other countries. “The key is to ensure that one generation won’t bankrupt future generations by living beyond its means” – a philosophy carried forward from Singapore’s first prime minister Lee Kuan Yew. Sure, there are lots of people in menial employment, but better that than the stigma of not contributing and indeed asking other people to work more to pay taxes to support you because you don’t work. The result? One of the lowest overall tax rates because everyone contributes (low unemployment too…), making Singapore the second most free economy in the world.

So what’s the point of the above? Whether a business or a country, keep order to keep control. And make sure there is a plan that extends past the next financial reporting period if you want success to last.

Insanity – doing the same thing over and over, and expecting a different outcome.

“Australian students are going backwards on literacy and numeracy even though governments are pouring more money into education.” Research from the Australian Council for Education Research shows. That is, not only are we falling behind other countries, we’re actually going backwards in real terms. Scarily, the top 10 percent of our maths students now perform at the same level as the top 40-50% of students in Singapore (which despite being a country with comparable living costs spend half what Australia does per student), South Korea and China. Since 2007, spending on education has risen by 68% or twice as much as the overall economy. We’re spending nearly $90 billion per year on Education (not counting private contributions), and are about to embark on massively greater spending (the so called Gonski spending) to continue along the same lines. It’s time that those spending the money were held to account and made to show results from what they do before being given any more of it.

I’m all for investing in the education of future generations. The above report also highlights that there is a steady decline in students studying STEM (Science, Technology, Engineering, and Maths), which is really the subjects that drive our ability to compete, innovate and indeed being able to contribute in our society. 20% of 15 year olds fail to reach minimum international standards in maths. These are the subjects that make people employable or able to start a business. In other words, Australia’s success will depend on what we do with our education budget, not how big the money pot is.

At what point do we ask the question why we continue to do things the way we do, when clearly it isn’t working? We need to find a different, better, way to approach the problems. The current approach to teaching future generations can only be described as insanity.