The Time when the Penny drops

We all have “Aha” moments from time to time, where it suddenly dawns on you just how obvious a problem and solution can be, often because you approach the issue from a different angle. Few dispute that productivity improvements and financial reward are usually interlinked. So despite the exponential growth in new technology in recent years, why aren’t pays increasing? The reason became quite obvious, the solution not so clear.

What linked all the dots for me about why we aren’t seeing wages growth was an article that was forwarded to me by a reader that highlighted the impact of technology through history on our society. In the 60 years to 1940, lives were transformed by the introduction of mains power, clean piped drinking water and urban houses transitioning to flush toilets, refrigeration technology to allow food storage etc. We also went from horse and cart to motor vehicles. At first this was through a combination of internal combustion engine (ICE) and electric vehicles, before ICE’s many advantages lead it to dominate the market. It was also the era when telephones became a mainstream communications device, for the first time connecting people a great distance from each other.

By comparison, if you teleport back 60 years from today – where are these monumental societal changes? The lifestyle changes are nowhere near as revolutionary. The biggest change is computing technology and the internet, which was meant to drive a paperless society (however we’re using more paper than ever) and efficiency improvements, which were to automate many mundane tasks. Greater access to information hasn’t necessarily translated to a smarter population, in fact common sense and critical thinking is on the decline because the answer is available through a quick search. Mobile phones have further improved communication. Reverting to Electric vehicles with range limitations are a step backwards compared to existing technologies, and windmills existed centuries ago but were abandoned due to only ever being able to provide intermittent power supply, which is unfit for purpose other than maybe pumping water out of a well. We probably thought we’d have flying cars, but commercial planes (when allowed to fly) travel at roughly the same speed they did in the 1970’s. Come to think of it, the decommissioned Concordes from the 1970’s were still faster than what we use now. Road speed limits have come down, despite all the safety technology and road improvements at our disposal. Granted, the range on planes has increased, and most cars now last about 3 times as long as they did 60 years ago (incidentally barring unforeseeable computer issues, that can’t be fixed roadside by the driver). We talk of recycling, but many products are made with a finite life (bought on cost over quality), whilst fixing them is prohibitive, so they get thrown on the rubbish pile early.

In the 15 years to 2005, Australia’s productivity increased 37%. In the 15 years since 2005, this has slowed to just 17%. The latest fad is a trend towards Working From Home (WFH), with savings in for instance reduced commuting times. But in a world of stagnant wages and profit growth, will these WFH developments actually improve our productive use of time and thereby wealth and wellbeing?

The biggest change in our society has been the transition from making things, to less tangible provision of services. Comparing 100 years ago to now:

45% worked in farming, mining or manufacturing, that is now less than 10% (but account for 80% of all export revenue).

100 years ago, half of the Australian workforce was employed in a “service” field, which has grown to 80% today.

The first category has been getting automated and more productive, but now accounts for a relatively small portion of our total population. The “Service” sector includes most Government, plus occupations like nursing, aged care, hair dressing, baristas etc.

My big “AHA” moment came with this realisation: Productivity is defined as output per unit of input spent. “Service” roles are as much about time and personal attention as they are about any kind of measurable outcome. In the provision of most of the “Services”, both the input and the output are largely “Time” – but you can’t produce more time than you put in. In other words, Service industries, largely irrespective of technological or other developments won’t become any more productive because they can’t.

As an example, a massage therapist charges for an hour of work and puts in an hour of work. A hair dresser might be able to fractionally improve the speed of cutting the hair, but the customer is there just as much for the leisure experience as the outcome. Within our own industry, an efficient stop/go traffic controller might get a few more vehicles through, but it still doesn’t change the equation that they have to be there from start to finish of the job. The “time” input is equal to the measurable “time” output.

In fact, there is often a negative productivity from service sectors, as we continually add more unproductive requirements (think of all the paperwork and ever increasing tape in all forms, a topic for another day). It’s not easy to understand exactly where all these hurdles are in each individual role but think of it like this. We are heading in the direction of the US, which now has as many as 30% of workers in what is called “persuasive industries”. Persuasive industry includes advertising, public relations and legal professions. It includes all the activists, lobbyist and industries that rely on Government funding and subsidies to exist. A persuasive industry relies on convincing others of continued funding to their cause and for the public to buy the “spin” for money to flow to it, but rarely produces anything of tangible value or benefit to the person paying for it (often paid for by taxes provided by the dwindling productivity improving portion).

So wages growth and with it wealth generation is hitting somewhat of a wall. As jobs that can achieve productivity growth are declining, it is being replaced with “Service” and “persuasive” jobs where the output either can not be improved, or the whole purpose of the job is simply to keep people occupied – creating more make-work roles.

The result of all this seems to be that our society is pivoting away from money or wealth, and moving towards “time” as a measure of wellbeing. In the 1970’s with the advent of the computer promising less paperwork and automation of mundane tasks, the prediction was to head towards a shorter working week, which has partly happened. We have more holidays and RDO flexibility than ever in the past. Work from Home is probably the next lasting part of that transition and could quickly become Work from Anywhere (WFA). But don’t expect more wealth when these roles don’t produce constantly improving outputs. If all we have to sell is time, in a global marketplace there is nothing stopping many WFA roles from leaving Australia altogether to a lower cost country, pushing wages down with it. Fair Work etc can legislate wage increases all it likes, but all that does is speed up the process to losing these jobs altogether.

Covid disruption has shown us that things like education provided by Australian Universities as an “export” industry can be supplied from anywhere, and Uni’s now face an existential threat as they have to truly compete on excellence in a global market. At least coffee’s, personal care and hair cuts still need the recipient to physically be in the same location as the provider.

In the end, there is probably not many better fields for a career or business than mining and construction. Both provide a tangible product of value to the recipient, and most of it can’t be done anywhere other than where the mine or construction is actually taking place.

And just to finish on a positive note for our many earthmoving customers, the below graph highlights an encouraging future. Currently most of the increase in spending is in NSW, but there is still a reasonable spread of projects right around the country. 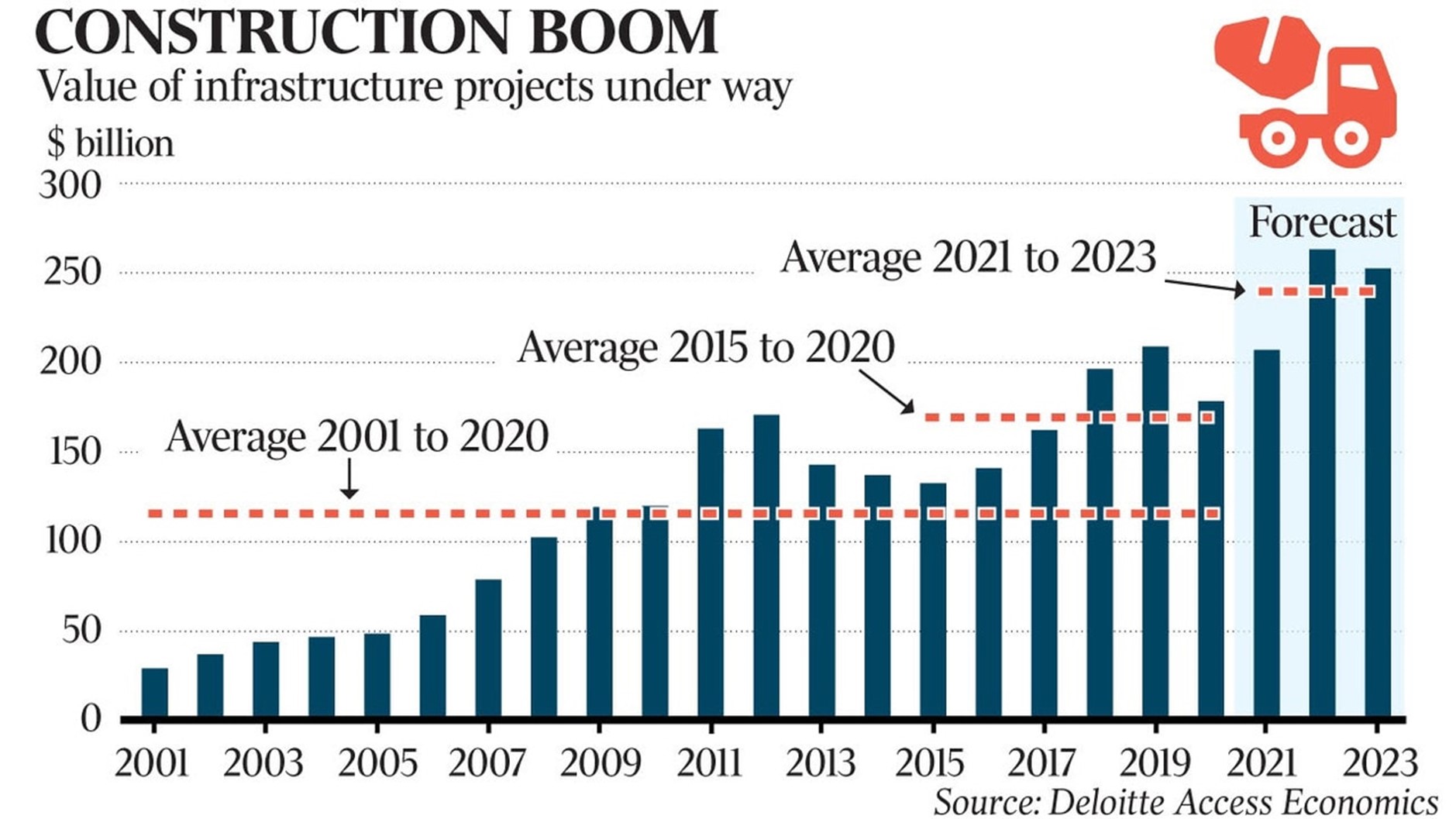