HomeNews & BlogBurning out of control

Burning out of control

Something dawned on me last week – we need things to have gone too far and be so visible we can’t possibly turn a blind eye before we do something meaningful about them. Apparently there were two major new events: people leaving their home country for a better future (the refugees from Syria and other nations), and domestic violence.

Both are very sad and should never happen. But the most telling thing is that neither event started last week, and has in fact been going on for years, if not decades. Seems like a lot of people just woke up to it though, the media jumped on board, and like weather vanes, we had politicians swing into action to outshine each other about how caring they were about these matters – even though they’d done nothing about it previously. The result? They needed to be seen to be “doing something”, and within hours, there were quite radical commitments supposedly ready for implementation.

Unfortunately this was done without taking enough time and thought to develop a strategy of how to deal with the matters in the most effective way. For instance, not much thought was given to the fact that of the over 50,000 boat asylum seekers that settled in Australia since 2007, over 88% still rely on Government welfare as their main source of income, and only 6% work. Despite having been here for a few years now, 40% still don’t speak English, and almost half have never had a job in their lives. So the real problems that are still unanswered are: how do we integrate people into our society, before we can take more? And how do we stop these issues escalating or indeed occurring in the first place?

So how is this relevant to our industry? If an issue is raised at “the right time”, maybe the winds will blow strongly enough for change. Our industry has been subjected to change in the past with all too many people thinking we don’t have a voice, only to later complain when things become legislation and we pay the price with increased costs. Think for example about much of the compliance burden placed on us, adding up to about one third of the cost of doing a job, and for very little actual improvement. As a result, we’ve become uncompetitive with the rest of the world.

In the same week as the above, I was reminded that many of the access systems that had been a requirement on machinery on many sites are now being removed. They were once put onto machines at great cost to remove some hazards (with 2 in 3 people in our population now overweight or obese, many operators could no longer safely climb a rope ladder), but introduced new issues. The nail in the coffin seems to have been the unreliability and maintenance costs, meaning machines are better off without them.

The last straw for me in the last week was to receive a copy of a Draft Revision to Australian Standards AS5062, Fire Protection for mobile and transportable equipment. Apart from being poorly written (100 pages and with contradictions in for instance Testing frequencies), the draft seems to have been simply compiling different concepts from different fire regulations. Enough, already! I’m not sure who drives or writes these things. Someone suggested the Insurance industry, but if the cost of claims goes down (which I question that it would, the systems are purely designed to suppress the fire to buy a bit more time, not put it out), so too does their ability to charge (and thereby they reduce their profits). My guess that it was driven by the Fire Industry is a possibility still, but having talked to some industry professionals, they say it’s more like a mashing together of popular phrases than something workable.

In any case, I urge you to read it (click here to view the draft) and provide your input. What the Draft is heading towards is to match the highest current standards (Coal industry, but snippets from other areas), but to apply it to all mobile and transportable equipment:

My big question is: to what benefit? There are some environments where there is a need for these systems (for instance underground). But of 639 work related fatalities between 2006 and 2011 (the latest proper study, released in November 2014), only 10% were design related (the biggest ones were lack of guarding, rollovers without seat belts, and electrocution through lack of residual current devices). In fact, I have been unable to find a single incident where having the fire equipment as per this draft would have stopped a fatality or even an injury. Take a look also for instance at the below photo of a D10 with full fire suppression system in place. As a picture says more than a thousand words, I’ll leave it at that. 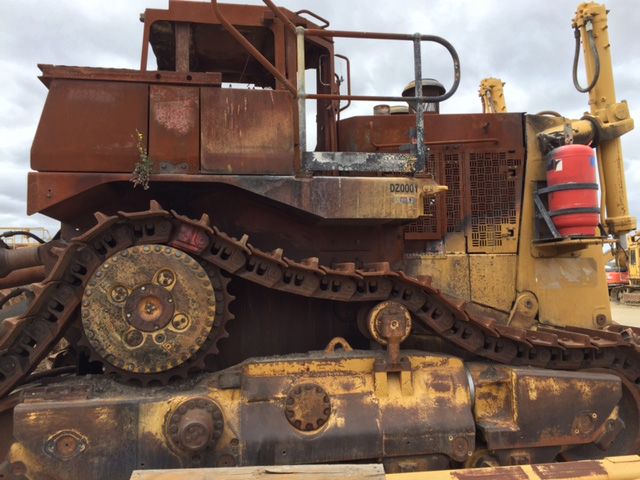 So what’s my point? Like the refugee or domestic violence situation, it’s time we did something about it. The point is we continue to have bureaucrats who like to look like they are doing something by increasing the regulatory burden on business. And it is about time that we made our voices heard loud and clear, that what they are doing is NOT what we want them to be focussing on. We don’t need more costly Red Tape, nor more people who feel a need to justify their jobs with extra paperwork or inspections.

So I’m asking for your help: in isolation, one piece of legislation doesn’t seem like much. But put them all together, and it’s becoming impossible to stay in business. Don’t let yet more legislation through that increases costs on our industry for next to no benefit. Lodge your voice by responding to this draft both directly (Click here to lodge your comment) as well as raise it through your industry organisations. And maybe the best approach is for us to ask them to justify why we need more regulation at all?