The world’s largest online retailer, Amazon (started in 1994 as an online book retailer, and largely responsible for the death of traditional book stores) just purchased the venerable Washington Post, which had been in operation for 125 years. The purchase price ($250M) was the equivalent of 0.18% of the market capitalisation of Amazon. The situation highlights the theme from last month’s newsletter where Online sales are overtaking traditional sales approaches at breathtaking speeds. Amazon’s sales last quarter were $15.7 billion, an increase of 22% on the same quarter last year. So, is bigger, better?

Amazon lost $7 million last quarter. Its philosophy has always been to grow rapidly, and the market will love the “blue sky” sales forecasts, hence investors will plunge money in. Whilst sales grew 22%, fulfilment costs rose 35% and technology investment jumped 47%. If my money was part of the $137 billion stock value of Amazon, I’d be wondering if Amazon will ever be able to make any money.

There tends to be “idolisation” of the big corporations and the Managers that run them. They’re big companies, so they have to be well run, right? One has to admire the entrepreneurial spirit of Amazon, but at some point, investors should start to expect profits at least above the interest the money could (relatively risk free) get in a bank account.

Alan Kohler recently researched the executive pay of our top 200 companies, and compared it to Share holder returns. There was no correlation whatsoever (refer below graph). In fact, it found that many executives were rewarded for business size, so usually went for mergers and acquisitions (the quickest and easiest way to grow turnover). Their pay had no correlation to performance. One example he used was comparing Commonwealth Bank (CBA) to National Australia Bank (NAB) over the last 15 years.  CBA had achieved a compound annual return of 13.7% (the All Ordinaries Index averaged 8.75%) and paid its CEO’s $98 million over the 15 years. NAB achieved 7.2%, but paid CEO’s $108 million. Kohler argued that CEO’s of big companies should get paid less than smaller ones, because they had more support staff to help them. In fact, the listed companies that do best are the demerged ones which become more focussed on their purpose, and closer to the action. 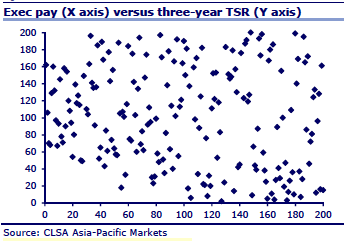 So, why does this matter? There is no optimal business size, but the lesson is that to be successful, businesses and their managers should be judged on their ability to generate outcomes and Profitable Growth, not growth for the sake of ego’s or (in the case of bureaucracies) building bigger kingdoms. In the growing debate on improving productivity, the spotlight needs to be put on Management and employee contributions alike, but also how efficiently funds are used. We need to find ways of embracing market developments (such as new technology) without losing the big picture – the purpose of all businesses (Government Service providers and Not For Profit included) is to be in a financial position to sustainably be able to live to fight another day.

As an aside, just under a year ago, our business internet banking stopped working. Our bank mailed us a floppy disk so we could fix it… Since then, they have revamped their internet banking, and as of next week, will have a mobile app running. I guess the threat of Paypal and other new transactional methods can force dinosaurs to evolve!

There aren’t too many people who would disagree with the concept of generating Power from natural sources where it is practical to do so. Unfortunately, we often rush ahead with things, then work out the cost and other implications. For instance, that to generate the equivalent power output of closing just one older power station (the Bayswater A power station in the Hunter Valley) requires 20 million solar panelled roof tops. The last few years’ national cash splashes for Solar panels has decorated about 1 million rooftops. Oh, forgot to mention, there are only about 10 million rooftops in Australia.

What about using some land instead, I hear? Well, to achieve the Green movements objective of replacing just the East Coast’s power requirements with 80% renewable energy by 2030 requires $332 Billion for the generation investment alone (wind farms and solar). That doesn’t include any network costs (which incidentally increased over 20% on 1st of July) or other costs like land acquisition costs. And there isn’t always wind or sun around when we need power, so perhaps we need to work out how to store this energy for when it’s needed first, so we don’t all have to use candles and highly polluting fire places on cold winter nights. Maybe we also need to factor in the land availability issue, after all, we’d need to fill an area just short of 2 times the entire size of the ACT with Wind farms and solar panels. Then again, with the torture of a Federal election campaign upon us, maybe bulldozing the ACT to make room would be a good start?

Hang on, is that tree’s on the map? Damn, if we have to chop those down, that’ll change the calc again. And what are these figures over here? Australia is planning to reduce CO2 emissions over 20 years by 5%, but China is projected to increase theirs by 238% (from a much higher overall starting point). So, to make up for that, there could be a great export opportunity of clean energy to help them out. Oh, we already assist the world with less polluting energy sources when we export uranium and shortly also substantial amounts of gas, but we don’t use it ourselves?